The Seoul I Love

Morning Calm.  A view of the Mapo gu area in Seoul from my hotel room.

You know what?  It’s a good thing we will have our company retreat next week.  It will give me enough time to shake off this overwhelming feeling I had from my last trip.  I just came back from Seoul and obviously still in a daze; my body already here but my mind still back there in the cold.  I usually only spend a week or so in a certain place so I could use my other leave days to visit other cities and see as much places as I can.  But this is the first time I wished I had stayed longer in one city.  It is also the first time I heard myself wishing for time to stop (obviously dreading the work waiting for me back in the office).  It seems that I am the only one who has not seen Seoul yet.  At one time and for some reason, I passed off an opportunity in the office for a free winter travel to this place.  I regretted that one.  So I made it a point that I get to visit Seoul this year.  With all these recent frenzy for Korean drama, this Seoul trip is all the more significant. 🙂

And I was not disappointed.  It was not really the best time to visit this place though.  We did miss the spring blossoms (since my daughter had to wait for the school year to end before we could get here) but the weather was the most pleasant with the air still cold and chilly despite the sky being bright and sunny (the closing of spring and the beginning of summer) which made this trip one of the most memorable.  This is one of those places that lightning gets to strike only once.  But unlike lightning however, tourists make it a point to hit this place at least twice in their lifetime.  How can you blame them?  Seoul is one of the most beautiful and tourist-friendly places on the planet (at least in the region I have visited).  It is a shopping haven for travelers (you ask the ladies) and a food mecca for the adventurous.  The locals are the most friendly; going the extra mile to make the tourist experience memorable and speaking the most sweet-sounding of all languages (even though I didn’t understand).  I apologize for that.  Maybe we listened to too many Korean songs and watched too much Korean drama while we were there 🙂 .  It is a very lovely and picturesque place with old neighborhoods preserved and nestled within a modern and bustling metropolis; with different seasons providing new perspectives on every familiar scene.  Despite the ravages and destruction of war, Seoul has come a long way to emerging as one of the world’s 21st century cities.  This is one model city enjoying a comeback that should not be missed. 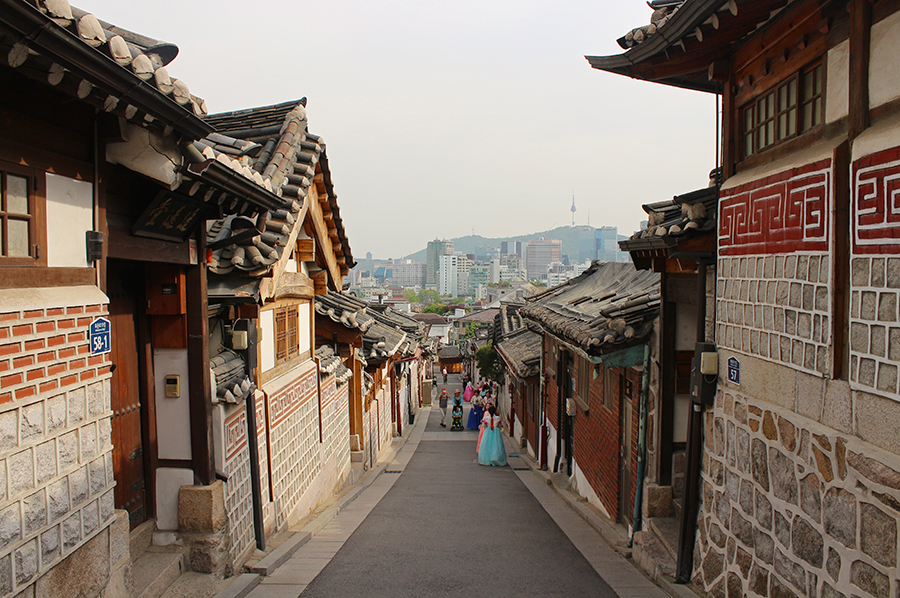 Old and New.  The beautiful Bukchon Hanok Village with the modern Seoul city in the background.

You have to believe me.  The photos in this post don’t do justice to the ultimate bliss of actually being here.  I originally wanted to do several posts about this trip with each post corresponding to each day I spent here; but then decided not to.  As much as I wanted to relive the experience, I also did not want the memory to linger any longer than it should.  It is one of those “I-wanted-to-stay-but-I-had-to-leave” situations you sometimes find yourself in.  Again, too much of that Korean drama  🙂 .  Besides, I also messed up my itinerary for my personal photowalk and committed the grievous sin of seeing most of the places I planned to shoot but actually forgetting to shoot some of them.  It is because the place is so beautifully distracting and the local food so sweetly unnerving.  All those preparations and plans to photograph the place with a fresh pair of eyes and from new angles all went down the drain.  I just simply didn’t care about doing original photography but just immersed myself in the moment.  I don’t even remember ever complaining about long walks and large crowds.  It was a welcoming change from previous tropical ramblings.

What am I talking about anyway?  Okay, I’ll spare you the Korean drama.  This is one place you definitely have to see.  But don’t take my word for it.  You just have to be here.  I am trying to make sense and order out of a disorganized bunch of random photos from my distracted photowalk and trying to write the names of places and their descriptions as I remember them.  So I share them here:  my must-see places in Seoul (the Seoul I love); not in the order of their importance but in the order I found them worthy to be salvaged from my camera’s memory card 🙂 .  Enjoy the images and stay inspired.

Gyeongbokgung Palace: Gyeongbokgung is the largest of Seoul’s four main palaces and perhaps the most recognizable of all the city’s attractions.  It has served as the principal residence for Korean royalties.  Much of the palace’s structures were destroyed during the 20th century Japanese colonial rule.  What you see now are mostly accurate recent reconstructions.  Take time to walk through the palace grounds beyond the Throne Hall to admire two beautiful floating pavilions:  Gyeonghoeru and Hyangwonjeong. 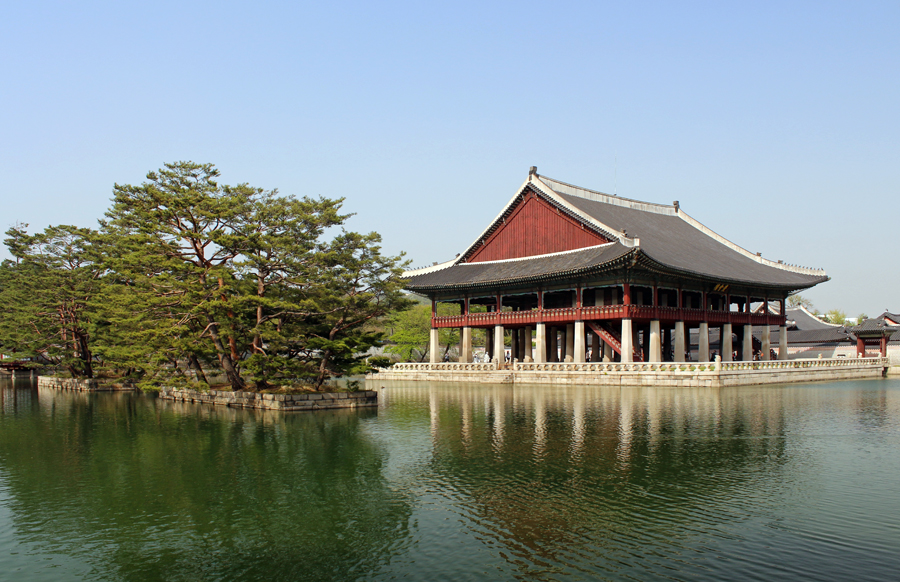 The highly-prized Gyeonghoeru Pavilion on an artificial island inside the Gyeongbokgung Palace grounds. 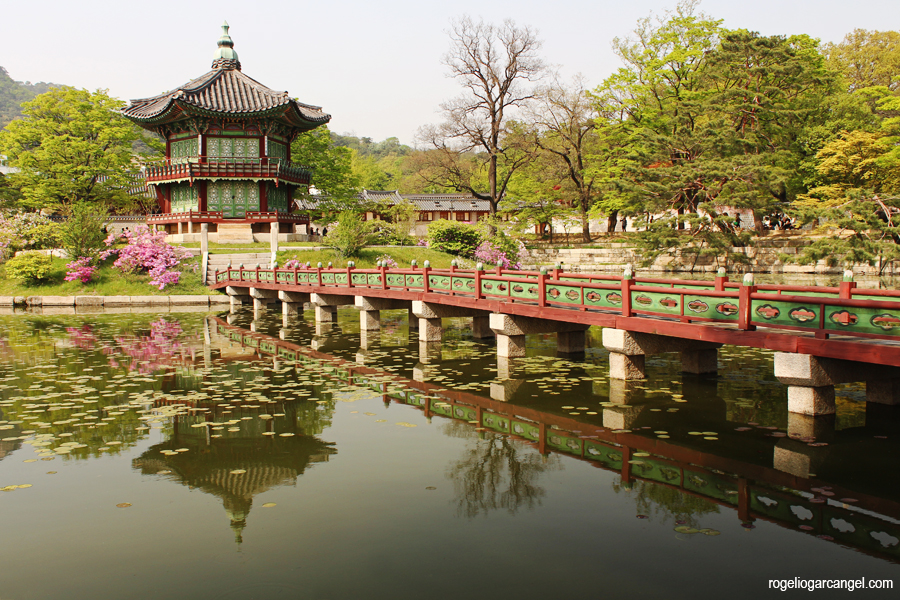 Hyangwwonjeong or “The Pavilion of Far-Reaching Fragrance” on an artificial island inside the Gyeongbokgung Palace Grounds.

Ehwa Womans University:  This is one impressive and imaginative piece of contemporary architecture I have seen during my stay here.  A sloping causeway dives six stories below ground level to the main entrance of this facility and is flanked on both sides by glass and steel fenestration.  The causeway is terminated at the opposite end by a flight of stone steps leading back to the Gothic style campus buildings at the ground level.

Ehwa Womans University is one of the most beautiful and unique works of architecture at the heart of Seoul City. 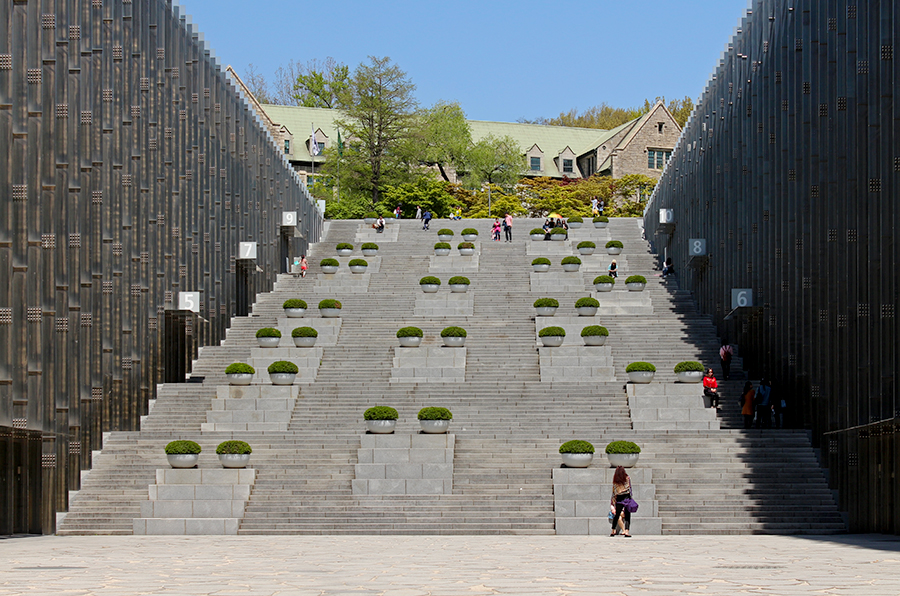 Seoul City Hall:  The recently redeveloped Seoul City Hall embodies the modern interpretation of traditional Korean architecture.  The curved top of the new glass and steel building resembles the roof of old palaces and temples.  Underneath its shade is the beautiful stone-cladded old City Hall building.

The modern and respectable Seoul City Hall at the blue hour.

Deoksugung Palace:  Also called “The Palace of Virtuous Longevity”, Deoksugung is one of several main palaces built during the Joseon dynasty.  It is the only palace ground that is open until late evening so you could admire the buildings when they are illuminated.  The highlight of this attraction is the unusual mix of traditional Korean and Western Neoclassical buildings within a single palace ground.

Seokjojeon.  One of the Western Neoclassical buildings inside the Deoksugung Palace grounds.

Cheonggyecheon Stream:  This famous stream of the Joseon era was once covered by an elevated highway that was built after the Korean War.  In 2003, the highway was removed as part of an urban renewal project to restore the stream to its present state.  The stream is 11 km. long running through downtown Seoul and passing under 22 bridges with several attractions along its entire length.

A River Runs Through The City. Cheonggyecheon Stream provides a soothing contrast to the surrounding urban jungle.

Namsan Hill:  Namsan Hill is Seoul’s geographical center and is topped by N Seoul Tower, its iconic observatory.  The cable car ride to the base of the tower is impressive enough; but the view of the city from the top of the hill is breathtaking.  Counter the cold weather with a cup of coffee and churros from one of the restaurants at the base of the tower. 🙂 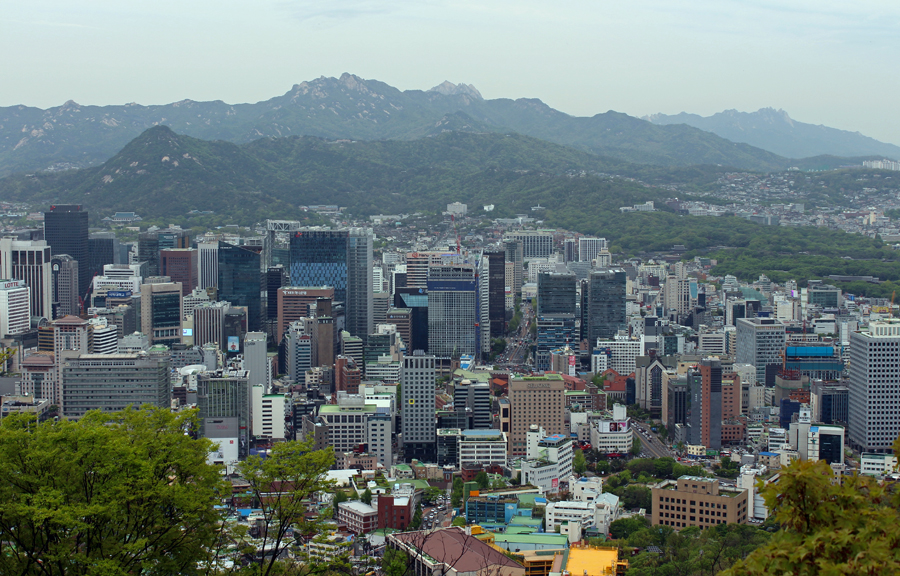 Breathe Again.  A view of Seoul city from the base of N Seoul Tower above Namsan Hill.

Love Locks.  Beautiful and assorted locks adorn the railings at the base of N Seoul Tower above Namsan Hill.

Bukchon Hanok Village:  Walking through the alleys of this village feels like going back to the time of Korean kings, dynasties, and royal subjects.  Bukchon is a cluster of traditional Korean houses (or hanoks) nestled between two main palaces at the heart of an urban city.  Some of the houses were recently converted to small coffee shops, restaurants, and homestays for tourists who want to be near major local attractions. 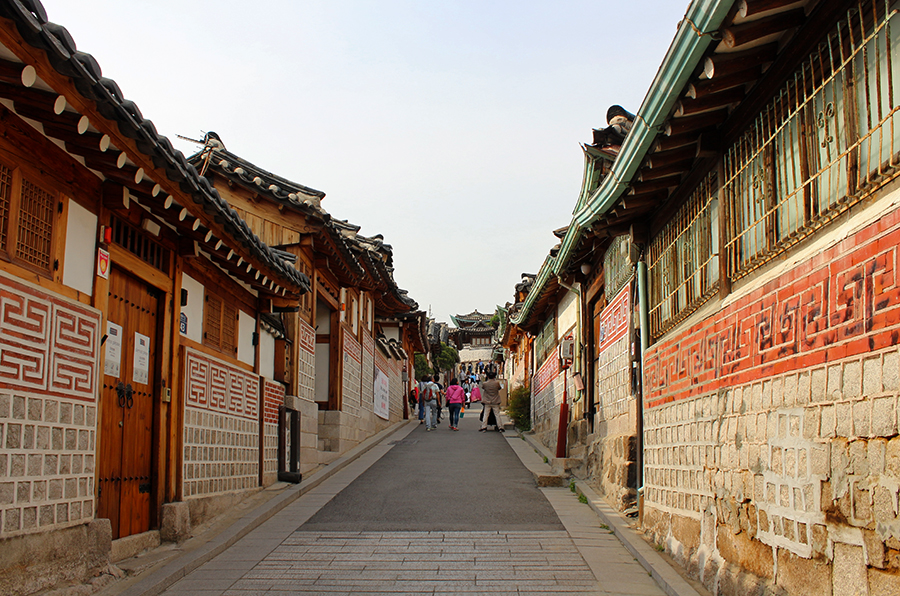 Time Passages.  A view of one of the picturesque alleys of Bukchon Hanok Village.

Some Sevit and Banpo Rainbow Bridge:  Some Sevit is a cluster of contemporary flower-themed buildings set on a man-made island off Han River.  The buildings house restaurants and a number of multi-purpose spaces.  Come during the blue hour to admire the buildings when illuminated by color-changing LED lights.  Next to the buildings is Banpo Rainbow Bridge (the world’s longest bridge fountain).  At night, colored lights illuminate the fountain as it sends up jets of water into the air with synchronized music.

Some Gavit.  The convention and corporate events venue of the Some Sevit community.

Some Chavit.  The dining and restaurant venue of the Some Sevit cluster.

Banpo Rainbow Bridge with the lights and water show at night.

National Museum of Korea:  The simple but impressive exterior doesn’t divulge much of the diversity of exhibits found in its interior.  The stories and cultural treasures within its walls are topics that require a separate discussion.  The lush garden and beautiful park outside the museum provide a calm and soothing contrast to the rigid and stately character of the buidling.

Thank you for reading. 🙂

← Malacca: My Take
Silence is Golden →

3 Comments on “The Seoul I Love”