This is another one of those times when you get to choose last-minute holiday destinations.  We took one week off in the office to celebrate the Chinese Lunar New Year.  At the back of my head, I was hoping that our company would send us to somewhere really cold or even exotic to spend the one-week holiday (like what our company usually do).  Well, that didn’t happen this year.  The announcement came in a bit late so most of us had to scramble and decide whether to go back to our respective hometowns or go somewhere else.  The plane ticket to my hometown (Manila) could get a little pricey this time of year, so I just decided to go to nearby Malaysia.  It seems that Malaysia for me is the default destination for long weekends and short road trips; for obvious reasons.  From Singapore where I am staying, it is only a few minutes or hours away depending on your destination.  Architecture, food, historical sites, beaches, nature, or theme parks; Malaysia has all that and more.  You choose.

So why Putrajaya?  Well for one thing, it was a day-trip destination that I wasn’t able to see the last time I was in Kuala Lumpur.  It actually rained that day last year I planned to visit the place.  But of course, my main reason for coming back to Malaysia now is Putrajaya’s architectural wonders.  A Malaysian colleague told me that you could actually tour and photograph the place and its notable landmarks in a day.  I know he’s right.  That’s why they call it a day trip (do I really have to say that?).  It is much like hitting Macau while you are in Hong Kong; or Abu Dhabi while in Dubai.  So why spend the entire week and book a hotel in such a small place? 🙂

Well, you have to understand photographers.  Photographers are weird.  The best colored landscape and architectural photos have to be taken only at certain times of the day (mostly at dusk or even sunrise) when light is low (and its quality is at its best) and when building lights are on which add drama to the scene.  So if you’re planning to shoot a number of locations or buildings, you’ll be needing a couple of sunrise or sunsets.  All sorts of silly stuff like that.  And you can’t post a photo right away.  A bit of image editing needs to be done to remove blemishes caused by a dirty camera sensor and to correct distortions resulting from a cheap lens and camera (which is definitely my case here).  Only then can you post an image.  But who cares anyway?  Only a photographer will understand.  Nobody could have cared less about the story or technicalities behind a photograph; or all the trouble you went through waking up early before sunrise or staying out late at night just to capture an image.  In a selfie generation, this is not your idea of creating a travel photo.  Well for me, the best way to ruin a travel photo is to include yourself in the picture.  Forgive me on that one.  I am too camera shy and not that photogenic (#bitter, #resentful). 🙂

Seri Wawasan Bridge. One of the most beautiful bridges in Malaysia using the latest cable-stayed technology.

Kidding aside, these places are too good to be just day-trip destinations that you could stamp on your passports to be used as bragging rights.  Much is to be appreciated and learned from the stories of these places and how they came about.  Just a few quick facts about Putrajaya:  Putrajaya is Malaysia’s “Intelligent Garden City” and its Federal Administrative Center.  A vision of establishing this new Federal Government Administrative Center to replace Kuala Lumpur came about in the early 1970s.  The relocation was to help decongest Kuala Lumpur and to ensure that KL can develop and focus on being Malaysia’s principal business and financial district.  A 4,900+ hectare palm oil plantation in Selangor’s southern Prang Besar estate was later earmarked and called Putrajaya (in honor of Malaysia’s first Prime Minister Tunku Abdul Rahman Putra Al-Haj).  The main feature of the city is the responsible integration of man-made elements with the natural environment; a city that integrates technology, culture, and nature.  Manicured parks, greeneries, and bodies of water create natural separations between the business and residential sections of the city.

The highlight of the trip for me of course would be the city’s architectural wonders which feature Malay and Arabic influences; and which form part of Malaysia’s National Heritage.  These are evident in the city’s several mosques, bridges, and public buildings some of which I have featured below.

Putra Mosque:  Putra Mosque (or Masjid Putra) is perhaps for me the architectural centerpiece of Putrajaya.  The mosque is distinguished by its pink dome and rose-tinted granite exterior.  The mosque can accommodate 15,000 worshipers at any one time and also houses function rooms and learning facilities.

Putra Mosque at the Golden Hour.

Seri Wawasan Bridge:  Seri Wawasan is one of the most beautiful bridges in Malaysia built with the latest cable-stayed technology.  The bridge is enhanced and illuminated at night by the changing colors of the street lights below it.

Seri Gemilang Bridge:  This bridge serves as the main entry route to the city core.  The bridge focuses on very fine Islamic motifs and detailing which emphasize Malaysia’s Muslim faith and culture.  The bridge also leads to Putrajaya International Convention Center (PICC) which is located at the southern part of the city. 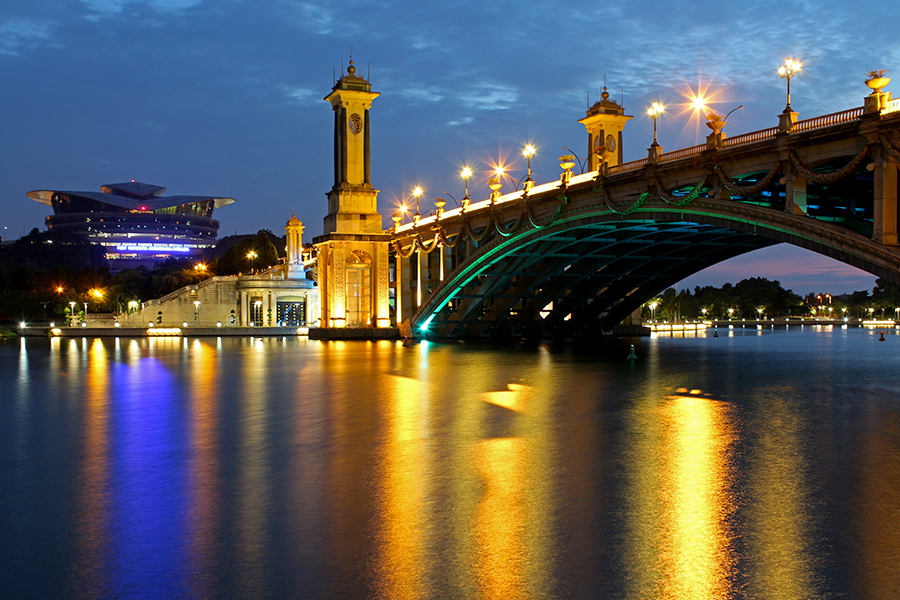 Masjid Tuanku:  Masjid Tuanku or “The Iron Mosque” is Putrajaya’s second principal mosque.  Slightly larger in floor area than Putra Mosque, it can accommodate 20,000 worshipers and caters mostly to the government workers from the nearby city center and residents from nearby precincts.

Masjid Tuanku (The Iron Mosque) at the blue hour.

Perbadanan Putrajaya:  Also called Putrajaya Corporation, it is the local body that administrates the Federal Authority of Putrajaya.  Framed within the arch of the building is Istana Kehakiman (or The Federal Court) which is the highest court and final appellate court of Malaysia.

The beautiful Perbadanan Putrajaya at Night

The best way to get to Putrajaya is to take the KLIA Transit train from Kuala Lumpur International Airport and alight at Putrajaya / Cyberjaya Station.  From the bus interchange at the station, buses can take you to the different routes within the residential, commercial, and government precincts of the city.  The bus routes could get a little complicated for a tourist.  So for the most part, I took a taxi (available 24 hours) to get to the locations I plan to shoot.  Cost is reasonable since the hotel is just near my planned shooting locations.

So there you go.  My first photo walk for the year and happy to have made use of the time given to us; and even happier to start the year doing the things we love the most and care passionately about.  I am currently looking at traveling outside the region which might take a while to happen because of some logistical concerns.  Meanwhile, enjoy the images as much as I do as well as the New Year.

← A Year in Postcards
Malacca: My Take →