Enter My Dreams. The gateway to Legoland Malaysia. Surprisingly, the place was not as crowded as I had expected.

This day trip to Legoland Malaysia just happened without much planning.  To be honest, it was a result of simply having nowhere else to go.  Legoland Malaysia is just a 1-hour bus ride from Singapore (where I am currently based) so it’s funny and embarrassing to admit that it was one place that I had yet to visit.  I finally got my chance during a public holiday.  The holiday fell on a Friday and I suspect some office colleagues already planned their long weekend somewhere really nice.  And here I am.  Stuck.  I needed to go somewhere too.  Somewhere.  Anywhere actually.

Legoland Hotel. Stay close to the action by checking in at this hotel located just across the park. The interior of this hotel is a theme park in itself.

But honestly, maybe at the back of my mind I already had a reason for visiting this place.  I wanted to go back to how I started; on how I became an architect in the first place.  When I started this blog, I was hoping to share about photography and the places that I will be able to visit; with perhaps a detailed account of what I will do and eat during each day of the trip in those places.  It’s what most bloggers do :-).  And believe me, I wanted to do the same.  But then, I realized you might as well buy a travel guide.  The accounts about the places (and the food) will be more convincing.

One of our life coaches taught us the lesson of the empty cup.  It’s a reminder to be teachable; on not to think so much of yourself as someone who has already arrived; and not to underestimate the power of a small person or place to teach or remind you of something important.  That happened to me here.  So, may I request that you indulge me once more in sharing my gleanings on this recent road trip and I promise next time, I will write about what most bloggers write in their blogs :-).  Thank you very much.

Color My World. The LEGO-inspired detailing of the Legoland Hotel facade.

Nearly everyone I know who grew up in my generation had their affair with the LEGO.  There were other toys before that but most did not offer much of a breakthrough compared with the creativity and imagination inspired by the LEGO.  I loved drawing when I was a kid and our bedroom walls were proof of that passion.  I know my parents had no problem repainting them regularly.  I had the drawings and the building blocks of the LEGO to work and to build with.  Growing up, I believe I enjoyed the high feeling created by the smell of freshly poured concrete and the way things were put together.  Everything fell into the right places.  I knew I had to build.  I wanted to be an architect.  And so an architect I became.  So now needless to say, I found this Legoland trip right up my alley. 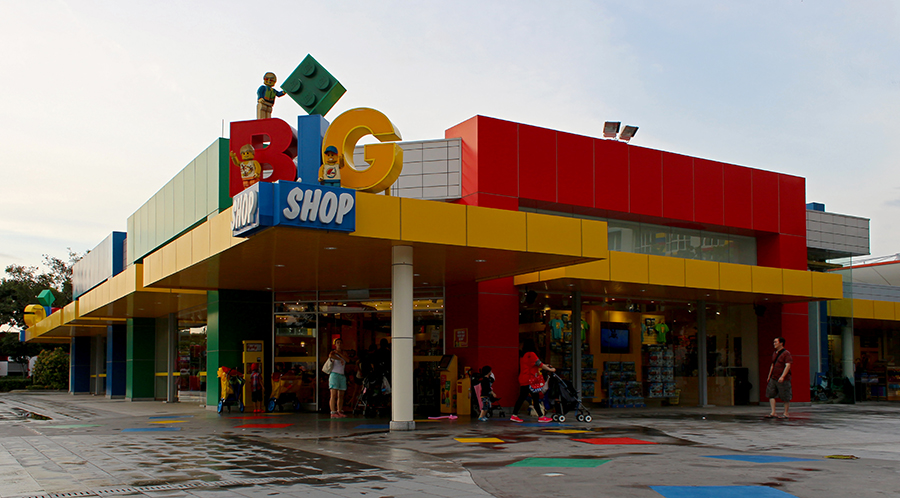 The Big Shop. The place for the ultimate LEGO fan.

At the facade level, the place looks just like your usual theme park designed only for children.  And like most theme parks I know, the place could be really hot and sweltering (sadly though, it actually rained most of the afternoon).  Unless you’re a LEGO fan, have children, or just plain curious; I am not sure you’ll think of coming here almost all by yourself.  But what awaits inside is something that can thrill people of all ages.  Honestly, for a moment I was a child again (I was trying my best not to make it sound like second childhood).

The park has several attractions (namely:  The Beginning, Lego City, Miniland, Land of Adventure, Imagination, Star Wars, Lego Kingdom, Lego Technic, and Water Park).  Depending on who you are with, your interest and your bias; you could spend an entire day in just any two or three of the attractions.  I tried some of the rides (the “adult-friendly” ones) if only to make use of the RM235 I paid to get to this park :-).  The last time I took a crazy ride was with my daughter when she was 12 years old.  I was a little younger back then and I was happy having created that memory for her.  Nowadays, I would have none of it :-).

Water Fun. Take the plunge at the Dinosaur Island.

Imagination. This is the place for the true LEGO fan where families can build and play with the LEGO bricks.

LEGO Academy. This area is also home to Mindstorms, where you can build and program LEGO robots.

Not surprisingly, what caught my attention was Miniland:  a miniature showcase of some of the iconic buildings of Malaysia and Southeast Asia.  LEGO released its architecture series a few years ago and featured some classic American buildings as part of its collection.  But to see some of the Asian buildings in a LEGO rendition and in a very impressive scale was a real treat.  I have seen some of the actual buildings so I couldn’t help but look closely at the miniatures.  The level of accuracy and detailing was absolutely incredible!  Back in our time, models were made using wooden blocks or cardboard to show clients the massing and placement of buildings.  Those however did not include details as we know them now.  Much of what’s to be expected was left to the actual completed structure.

A LEGO version of the Singapore Marina Bay Waterfront buildings with the Merlion Park in the foreground. 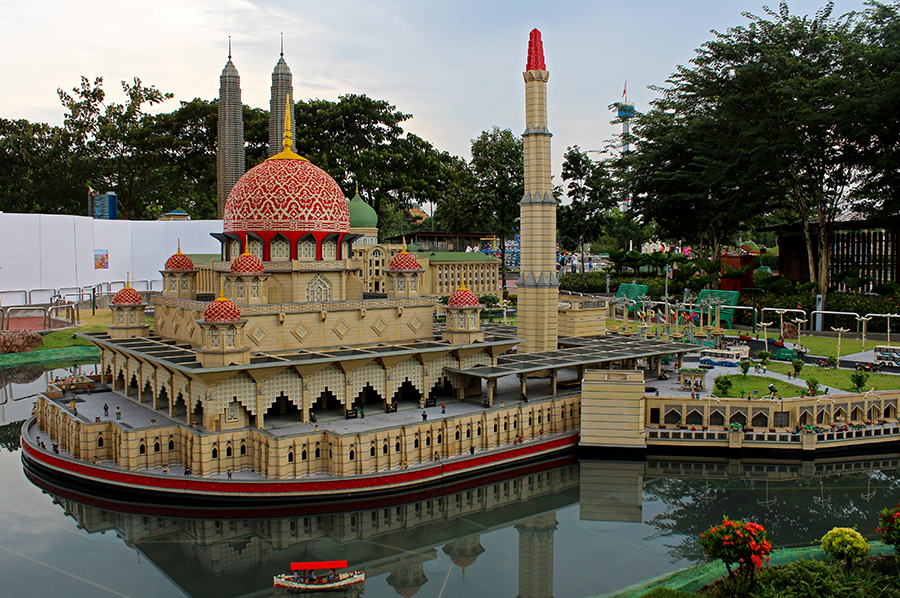 A LEGO rendition of the Putra Mosque, the centerpiece of Putrajaya in Malaysia.

The Taj Mahal in miniature. The level of detailing is incredible.

But you know what surprised me the most at the end of this visit?  It’s actually the kids and the families working together on the LEGO.  I don’t know where I’ve been lately but honestly, I haven’t seen that for quite a while.  I grew up in a time without computers.  It wasn’t always the best of times but it somehow taught me the ever-increasing value of face-to-face conversations, collaboration and high-touch, tactile activities;  especially in these times when our kids have more facebook friends and high-tech gadgets.  It makes us want to consider carefully the balance of the types of toys we give to our kids.  Maybe it’s the reason themed places like this still thrive.  People still do recognize its significance after all.

Star Wars Museum. The latest addition to the Legoland experience. The museum features miniature versions of the Star Wars landscape as well as a new indoor visual experience.

My daughter also grew up without a computer.  I didn’t decide on that.  I just couldn’t afford it back then :-).  The only good that came out of it was that she learned how to draw and to work with her hands (yes, she also knows how to draw.  I even tried to sell her the idea of taking up architecture, but in vain).  Thanks to the upcoming movie installment of the Star Wars saga, the LEGO is back again with its Star Wars characters collectibles; and it’s a funny and creative way to get my daughter interested in the LEGO (of all things, she bought a Darth Vader key-chain / LED light to start with).  Now, whether or not this interest will lead her to the path of her lifework is another story.  Until then, I wait :-).

Click here to browse through the photo gallery of this day trip.

← The Best Things in Life are Free
A New Orient →